Hey Everyone,
It’s time for an update on how skill trees are progressing after a first round of user feedback!

User Survey & Feedback
In March we asked for feedback on the skill tree using a simple mockup of the nodes. Visually it wasn't the best to look at, but content wise it conveyed everything we were wanting. With that said, here is a quick summary of some the observations made.

The last point was great to see - the entire point of the tree being designed with nodes of the same skill being spread out was to encourage hybrid characters builds with no single skill they rely on alone. Overall from feedback it appears people are receptive to this idea, though it is still entirely possible to focus on a single skill if that is how people want to play. With that said we are happy with the initial feedback in this regard.

Lastly, we expected people to not be happy with the visual looks of the tree used in the survey. This was a simple mockup used only to convey the content. However we did get some good feedback on suggestions visually where to go and this was used to inform the current concept art for the skill tree.

Initial Designs
Moving onto the initial designs, we wanted to make it easy to do a couple things: distinguish between the node types as well as between the different kinds of skills and stats. 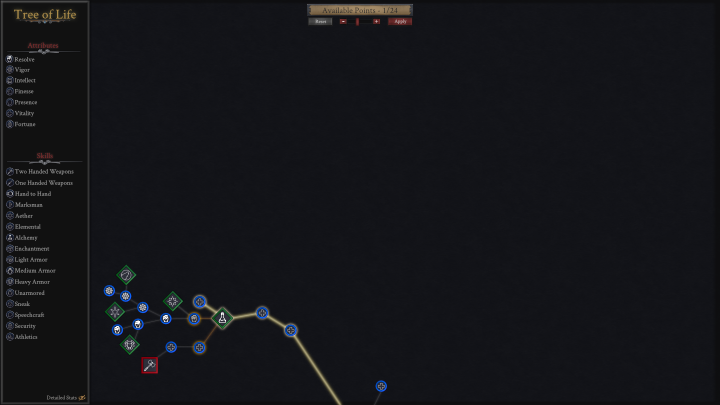 To help with the various kinds of nodes, we decided to make use of different shapes as well as color. Each skill or stat now has an associated icon to help clearly show what each kind of node on the skill tree represents. The players already selected nodes are highlighted and connected with a white line. The possible choices are shown with an orange line, and the full node path is shown with a gray line.

Some more things that need to be worked on are filters to find specific kinds of nodes, as well as determining everything that goes into the detailed stats pane. We have some initial ideas for that and we will be back in part III to discuss that.

Summary
Within the last month or so we got some user feedback on how the skill tree behaves, as well as suggestions on visual problems it had from the early stages. Those have been addressed and we now have some rough concept designs of how the skill tree might look in game. These designs will get finished up in the coming month and a new wave of user feedback will go out. Once that is done, the designs will be tweaked as needed and we will progress onto finalizing all of the nodes in the tree to prepare for implementing it into the actual game.